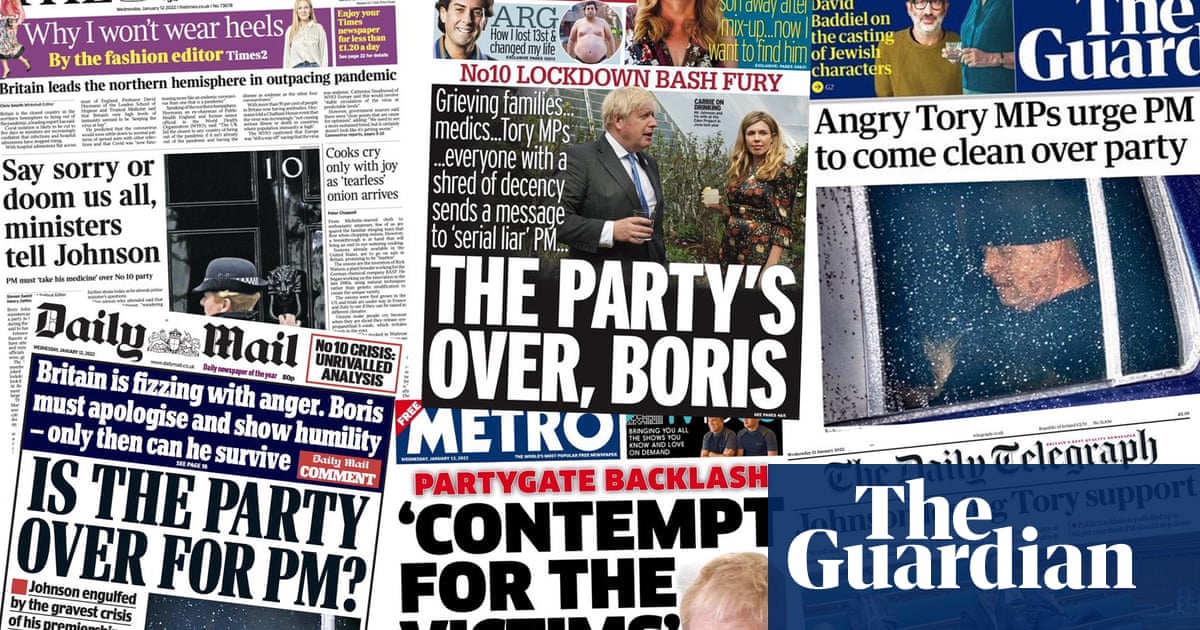 Boris Johnson’s grip on the prime ministership is openly questioned on the front pages, as unease in Tory ranks grows over the latest revelations of garden parties at No 10 at a time when gatherings were limited to one person.

After smaller stories acknowledging the discontent a day earlier, the broadsheets splash on the backbench rebellion on Wednesday, with the Times’ headline saying: “Say sorry or doom us all, ministers tell Johnson.”

The Telegraph sends a steady but clear message to the PM with the headline: “Johnson losing Tory support”. Its full-width front page picture is of a lonely looking junior minister, Michael Ellis, sent out to bear the brunt of MPs’ anger.

The Guardian also captures the Tory anger in its headline and gives prominence to the suggestion of Douglas Ross, the Tory leader in Scotland, that Johnson should resign if he broke Covid rules.

Several papers riff off the party aspect. The Daily Mail asks: “Is the party over for PM?”, saying his future as leader was being openly questioned and calling it the “gravest crisis of his premiership”.

The Mirror is more emphatic, saying “The party’s over, Boris” and makes note of the families who grieved alone on the day the party is said to have happened.

The Metro focuses on the reaction from people who lost loved ones to Covid, plus a snap poll suggesting majority support for a change of prime minister. “Contempt for the victims” is the headline, alongside an image of Johnson showing him appearing to “smirk” during an interview about the crisis.

The Sun tries out the strapline of “No 10 garden partygate” and reports Johnson “went into hiding” and that donors and senior Tories are questioning his future. “It’s my party and I’ll lie low if I want to” is the headline.

The i says “PM’s future in jeopardy as Tories rage at lockdown drinks party”, based on MPs saying they feel a “creeping doom” about the prime minister’s future.

The Daily Record quotes a woman who couldn’t be there for her dying brother, saying Johnson should resign.

The Express does its thing and claims support within the party is still strong for Johnson after “delivering Brexit and winning the war against Covid”. “Don’t blow it now, PM!” it urges in the headline.