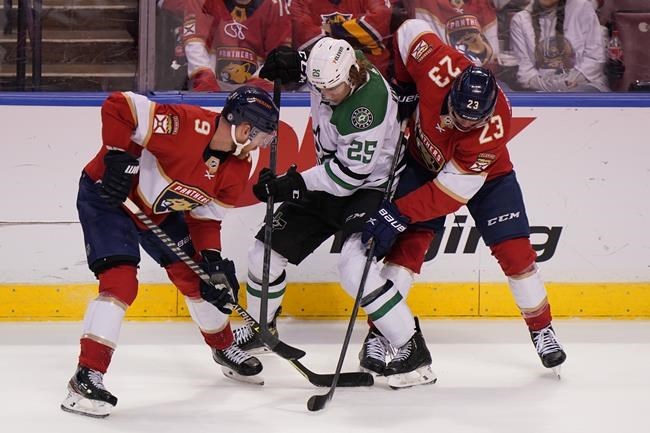 SUNRISE, Fla. (AP) — Sam Bennett scored his second hat trick this season and added an assist to lead the Florida Panthers over the Dallas Stars 7-1 on Friday night.

All-Star forward Jonathan Huberdeau had a goal and three assists to give him 51 points. Gustav Forsling scored his first of the season, Anthony Duclair had a goal and two assists, and Carter Verhaeghe also scored for the Panthers.

Brandon Montour had two assists, and Sergei Bobrovsky made 28 saves.

The Panthers are 7-0-1 since the extended Christmas break and they improved to 20-3-0 at home.

Jake Oettinger allowed four goals on 17 shots. He was replaced by Anton Khudobin with 13:57 left in the second period.

Zuccarello finished with two goals and an assist, Boldy and Ryan Hartman had one of each, and Kirill Kaprizov added two assists in his return to the lineup after missing a game with an upper-body injury.

Kaapo Kahkonen made 39 saves for the rested Wild, who won their 10th straight against the Ducks — the longest win streak against one opponent in team history.

Anthony Stolarz stopped 23 shots for Anaheim but was pulled after Victor Rask made it 6-1 at 2:05 of the third period. Kevin Fiala and Matt Dumba also scored for the Wild.

Max Comtois, Derek Grant and Trevor Zegras scored for the Ducks, who played much of the night without two top scorers.

Points leader Troy Terry, sixth in the NHL with 22 goals, was placed in COVID-19 protocol. Sonny Milano, tied for second on the team with nine goals, left in the first period with an upper-body injury and did not return.

DENVER (AP) — Nazem Kadri scored the winner in a shootout and Colorado extended the NHL’s longest home winning streak in nearly four years to 13 games with a victory over undermanned Arizona.

The Coyotes were outshot 47-25 but took a 3-2 lead on Shayne Gostisbehere’s goal 39 seconds into the third period.

All-Star Clayton Keller scored his first career short-handed goal and Johan Larsson also scored for Arizona, which went 0 for 3 in the shootout.

Ivan Prosvetov made 44 saves for the Coyotes in his second NHL game this season.

The Avalanche have trailed in every game of their 6-0-1 stretch.